The meeting started at 7:10 at Abby’s Pizza on River Road.  Eighteen members were present.  Jeff L. read the treasurer’s report, which was approved.  Dave F. read the minutes from the December meeting.  The minutes were approved.
Under Old Business, it was announced that Willamalane Indoor flying fees have gone up this year – to $6 for in-district residents, and $8 for those who live outside the district.  It was also mentioned that Lane Forest did regravel have the driveway at the field.
Under New Business, President Roger opened discussion for the planning of flying events for the year.  Membership decided to have 4 events:
-Memorial Day Event
-July 4th Warbird Event
-Monster Fest Event, tentatively scheduled for August 26th-27th.
-Labor Day Event
Roger pointed out a need for a broader group of members to volunteer to help out at these events to spread the load so that the “usual” helpers don’t get burned out.
Also under New Business, Richard Walker was introduced as a new member.
Under Show and Tell, Mickey C. brought his beautiful Howard DGA6, aka “Mister Mulligan” to show.  Mickey spent 2 years on this project!
Roger closed the meeting at 7:40 p.m.

ERCA Minutes for the February 21, 2017 Meeting:
The meeting started at 7:25 p.m. at the River Road Abby’s Pizza. There were 22 members present. The January minutes were read and approved, and the Treasurer’s report was read and approved.
Under Old Business:
Jim C. reported on field improvements for the past year, which included:
-gravel resurfacing on Mike Burgess’s entry road up to the left turn to the field.
-the mower shed floor was replaced.
-a new pump was installed.
-the geotech surface was purchased and installed.
-underground sprinklers were installed on the southeast edge of the field.
-the field was sanded and fertilized in the fall.
Jim C. also passed around the watering crew list of volunteers for this summer.
Under New Business:
-Geral Yarborough introduced himself and was voted in as a new club member.
Under Show and Tell, Roger brought a good-looking PT-19 that he built from a kit.
The meeting was adjourned at 7:45 p.m.

Under Old Business:
Pat discussed the upcoming Monster Fest. It was decided that the entry fee will be $30 for all 3 days; and that the event will be open to “all size” airplanes.
-The event will run for 3 days — Friday, August 18th through Sunday, August 20th.
-Brad agreed to be the Contest Director for the Monster Fest.
-Pat agreed to search for donors for the event.
-There will be 1 raffle drawing on Saturday, and 1 drawing on Sunday.
-A food vendor will be provided on Saturday.

Under New Business:
-A Creswell Swap Meet will be held in May.
-It was announced that there is a need for a new load of gravel for the driveway.

-Under Old Business:
The driveway has been surfaced with Al B.’s scraper.
It was announced that a load of gravel will be needed when the weather dries out the road surface.
It was mentioned that we will need a load of loam to fill the holes left be elk tracks this winter.

The meeting began at 7:10 p.m. at Abby’s Pizza on River Rd. There were 17 members present, plus 4 guests. The minutes were read and approved for the April meeting. The Treasurer’s report was read and approved.
Under Old Business…
-Jim C. announced that he is about ready to purchase a new fertilizer spreader ($190), and get some yellow jacket traps for the field.
-The runway grass has been reseeded where needed.
-Fertilizing will be done sometime in early June, weather permitting.
-It was also announced that the cutout on the left side of the culvert heading into the field has an eroded area that might become a problem. Roger said he would touch base with Mike on this.
Under New Business…
-Four guests were introduced – all family members. They were Dave Lloyd, David Lloyd, Christie Lloyd, and Trevor Stroda. All 4 were unanimously voted into the club.
-Dave Carlson suggested that we update the “mugshots” of our members and post the updated pictures in the clubhouse. Members can have their pictures taken by the Secretary (Dave F.) at the next meeting, or submit their own pictures via email to Jim C. for inclusion in the new “member board.”
-The meeting was adjourned at 7:30 p.m.

“We are updating the “mugshot” pictures of our members to be posted in the clubhouse. Members can have their pictures taken by the Secretary (DaveF.) at the June meeting (at the field), or submit their own pictures via email to Jim C. for inclusion in the new “member board,”

The meeting began at 7:00 at the field. Seventeen members were present. Jeff read the Treasurer’s report, which was approved. Dave read the “amended” May minutes, were approved. The original minutes failed to mention that Geral Yarbrough was voted in as a new member at the May meeting.
Under Old Business:
-Two yellow jacket traps were put out, and three bees were caught.
-Jim mentioned a need to buy fertilizer for the field. Members also discussed sanding the field, but decided not to lay down sand until after the Monster Fest in August.
-A discussion about replacing the roll-out tarp roof ended with a decision to take no action until the tarp actually needs to be replaced.
-Frank stated that he heard from Pat that planning for the Monster Fest is going slowly, and that there is a lack of sponsors for the event.
Under New Business:
-Members voted to set the landing fee for the Warbird event at $10. Food and soft drinks will be available from 9-to-4, and there are a number of awards to be given out.
-Al mentioned that raffle tickets are available to go toward the Doernbecher Children’s Hospital.
-Jim gave an update on a proposed underground watering system, stating that it was not practical due to the expense to install electricity.
-The members discussed whether to limit the number of times that “guests” could fly at the field each year. Geral suggested that there be a sign-in sheet for guests.
-After discussion, it was agreed that all members should display their membership cards when at the field, as per our by-laws, to help avoid confusion about non-members using the field. Mickey stated that he would make a sign for the field to remind members to display their cards.
Finally, Dave Sharpe was introduced as a guest, then voted in as a member. Dave is a former member of the South Lane RC club.
The meeting was adjourned at 7:50 p.m.

Return to the Top 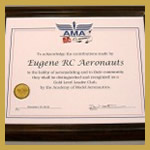 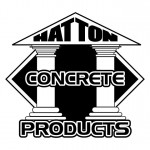